Dog crate training is considered a wonderful thing to do by most dog professionals.  There are many benefits for the new dog owner and for his dog.

A dog crate provides a wonderful retreat for your dog whenever things get too hectic in your home.

When not in use, just leave the door open so you dog can access it as needed. 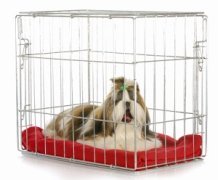 Often new dog owners think that using a crate for their new dog is cruel and resist this training. But if you do it right (following the instruction on this page), your dog will enjoy using his crate.

Remember that dogs are descendants of wolves who are used to living in dens. For today's dogs, a crate is often the closest thing they have to a den.

You could, of course, make the crate even more den-like by covering all but the front of the crate.

The Basics of Dog Crate Training

Crate training will help to establish you as the “Alpha dog” (the leader) of your puppy’s pack.  For this reason, you should start your puppy in his crate while very young.  Most puppies will take to their crates quickly and will not require much coaxing.

Others will require more patience.  In either case, it’s important that you introduce your puppy to his new crate in a gentle manner.

You must never force your puppy into the crate.  This will only create an atmosphere of anxiety and resentment towards the crate and perhaps towards you.  By following the steps outlined below your puppy should accept his new crate and love it within just a few days.

Dog crate training is the first and best step in your dog's life with you. It will make all the other steps in his training much easier.

The following is an easy to follow process for dog crate training that is both gentle and effective.

Secure the door open so that it can’t suddenly shut and frighten your puppy.

Start by tossing a treat that your puppy likes into the crate.  If he doesn't go in to get it, toss it progressively closer to the door until he does.

Note: In some cases, you may need to begin by tossing the treat just outside the crate entrance.  Praise him excessively each time he goes into the crate. This praise is a vital part of dog crate training!

Repeat this several times over a period of about an hour without closing the door and by tossing the treat progressively further inside the crate. Treat this as a game and as a bonding opportunity.

It’s important that your puppy sees this as a very pleasant experience.  Note: If you want him to go into the crate on command, say “Kennel” (or choose another word or phrase that you like) every time you toss the treat in the crate.

Once your dog is readily entering the crate to retrieve his treat, he’s ready for the next step.  Now after he enters the crate and while he’s focused on the treat, close the door.  Again, praise him generously for going in the crate.

After a very short time (no longer than 10 or 20 seconds), open the door and let him out without saying a word.  Don’t praise him for leaving the crate.

At this point you are conditioning him to the fact that his periods of confinement will not be permanent and that you will always return to let him out.

Repeat the above several times the first day for progressively longer periods of confinement (up to about 2 minutes).  It’s important that you not leave him in the crate so long that he becomes upset.  Each training session should end happily.

After the first day, begin feeding him his regular meals in the crate.  Put his food as far in the crate as he will go without becoming anxious or fearful.

This may mean that you need to start by placing his food just outside the crate.  At each feeding place the food further into the crate.

Once he’s comfortable eating at the back of the crate, begin closing the door while he eats.  With each successive feeding, extend the length of time the door is closed by a few minutes.

Don’t extend the time too quickly, however.  If your puppy gets anxious and whines, you've probably progressed too quickly.  Next time, reduce the time and proceed more slowly thereafter.

Once he’s eating his meals in the crate without anxiety, you can begin confining him there for short periods while you’re home.  Using a treat and your command (“kennel”), encourage your puppy to enter the crate by pointing to the crate.

Once he enters the crate, praise him, give him the treat and close the door.  Sit quietly by the crate for 5 or 10 minutes and then go into another room for a few minutes.  When you return, sit quietly for a short time and then let him out.

Don’t praise him or make a big deal out of his leaving the crate.  It should just seem like a normal everyday experience. Note: Keep a safe toy in the crate for him to play with and chew on. This becomes especially important once you start leaving the room.

Rotating toys is also a good idea so that your puppy doesn't become board with one toy.

You can begin extending the length of time your puppy is in the crate very gradually over the next week or so.  Remember to exercise your puppy before and after extended periods in his crate.

Note: Don’t crate your puppy too long before you leave the house (anywhere from 5 to 20 minutes is okay).  Also, make your departure as normal and as uneventful as possible.

Don’t draw it out or make it emotional.  This will only make your puppy anxious and fearful.  Your return should also be handled in a low-key manner.

What If Your Puppy Whines?

This can be the toughest part of dog crate training for the new dog owner. But it's vital that you handle it properly and not give in to your dog's whining.

Many puppies will whine, bark and howl when first being crate trained.  It’s important that you not remove your puppy from the crate until he quiets down.  If you let him out while he’s upset, he’ll learn that whining is the way to get out of his crate.

Note: Usually ignoring his antics will get him to stop, though sometimes a harsh-sounding “No!” may be necessary.  But whatever you do, don’t let him out until he’s quiet.

If your puppy whines at night because he needs to potty, however, take him out at once.  When he’s done “his business,” place him back in his crate immediately.  Don’t play with him or leave him outside the crate.  He will soon begin to realize that his nocturnal whines get him only one thing.

DO use the gentle approach for dog crate training as outlined above.

DON'T force your puppy into the dog crate prematurely. You’ll only frighten him and make the rest of the training more difficult.

DO use the crate for brief "time-outs" for an overly excited dog or to interrupt other unacceptable behavior patterns.  (When you do this, however, limit the confinement to no more than 15 minutes.)  But…

DON'T use the dog crate for punishment. Dogs are not like children and will not be able to make the connection between something they did that displeased you and having to spend time in the crate.

DO teach children that the crate is a special room for their pet and that they should never pester the dog or puppy when it’s in the crate or use the crate as a playhouse.

DON'T use a dog crate that's too SMALL for your dog or puppy.  Your dog should at least be able to stand, lie down comfortably and turn around in the crate.

DON'T leave your dog crated for long periods of time (rarely longer than 3 or 4 hours and usually much less). If you’re continually crating your dog for longer periods, you should look into other confinement options (such as an exercise pen or gated room).

DON'T use the crate to isolate your dog from the family. Dogs are social animals and the dog crate should be located near family activities whenever possible.

DON'T scold your puppy or dog if he soils the crate.  It’s not his fault.  It’s more likely that you need to make arrangements so that he’s not left alone so long.

DO keep one or two toys in the crate to keep your dog occupied. Note: Any toys that your puppy has access to should be large enough to prevent their being swallowed and NOT have any parts that can be chewed off and swallowed.  You should check the toys periodically to ensure their safety.

DO outfit your dog crate so that it's comfortable and safe for your dog.

DON'T crate your puppy or dog only when you’re leaving the house.  By also crating when your home, your puppy becomes comfortable in the crate and confident that you’ll return. This helps to eliminate separation anxiety.

DON'T crate your puppy or dog when temperatures reach an uncomfortable level.

DO provide continuous access to cold water if your puppy will be crated longer than 2 hours and during warm weather.  Note: You can use a small hamster-type water dispenser with ice water attached to the crate.

Dog crate training is an important first step for all the training that will follow. Be sure to follow the above steps for gentle introducing your dog to his new crate.

Return from Dog Crate Training to the Homepage 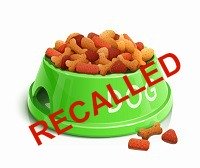