How to Paper Train A Puppy:
A Housebreaking Alternative

Is it okay to paper train a puppy? The short answer is yes. In some cases, it may actually be the best option. If you are city-dweller living in a high-rise apartment, it might not be practical for you to take your puppy outside every few hours while you’re housebreaking him. 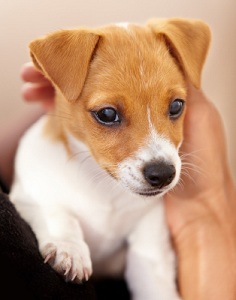 If you’re disabled or simply have trouble getting around, it may not be possible for you to take your puppy outside at all.

In some cases, you may be able to rely on family members or roommates to take your dog outside. But, not everyone has that option available.

If you have the option, housebreaking is always best. There aren’t many people who would prefer to have their dogs urinating in the house.

But paper training might be a better option than not having a dog. Many people would rather put up with that than to give up the idea of having a canine companion.

When you paper train a puppy, you rely heavily on your puppy’s wolf instincts. As descendants of wolves, all dogs naturally gravitate toward living in a den. That’s why dog houses and crates are such good ideas for your dog.

When given the choice, instinct tells dogs not “potty” inside their den (or anywhere near where they sleep). So in paper training, we use this fact to teach puppies where it’s okay for them to “potty.”

Preparing to Paper Train a Puppy

Like most things in life, when you paper train a puppy your success largely depends on how well prepared you are. Don’t think that you can throw down some paper and your puppy will know what to do.

Here are a few things that you should do before starting to paper train your dog:

Get Plenty of Newspapers

This may be obvious, but you must have plenty of newspapers if you want to be successful.

Dogs are naturally drawn to places they have used as a toilet before. What draws them is the scent. Even if you can’t smell it, your dog probably can.

Therefore, you must not only clean up after an accident, you must completely eliminate any left over odor. Use the odor neutralizer every time your puppy goes where he shouldn't.

Define a "Containment Area" in Your Home

Paper Train a Puppy by The Numbers

Cover the floor in your confinement area with newspapers (4 or 5 sheets deep). It’s important that the entire area be covered to begin with.

Do not release your puppy from the area until he has “done his business” (generally 10 - 15 minutes after eating).

Once a day replace all of the “used” newspapers with fresh ones and use an odor neutralizer on the floor below.

Place one of the used newspapers in the area that you would like to train your puppy to “potty,” and cover it with a fresh newspaper. This should be the furthest spot from where he sleeps.

The scent of the used newspaper will encourage him to go back to that spot. But don’t be discouraged if this trick doesn’t work immediately. It make take several days.

If you find that your puppy is gravitating to a certain area, then use that spot. You can always move it once he’s trained.

As your puppy begins favoring a particular spot, start reducing the size of the papered area by removing some of the papers he’s not using. You need to do this very gradually, though.

Once you've reduced the papered area to the size of a single newspaper, begin moving the papers to the location that you’d prefer to use long-term.

Again, you need to do this very gradually by moving the papers only a few inches each day.

If you find that he goes potty off the papers, you've probably moved them too quickly. Move them back and begin moving them more slowly next time until your puppy is paper trained to the spot you've chosen.

As you’re moving the papers you will need to use a pet deodorizer on the old spot.

At this point, you may either expand the confinement area or eliminate it altogether (as long as your house is suitably puppy-proof or your puppy is old enough to be trusted in the rest of your home when you’re away).

To paper train a puppy requires patience and consistency...like everything that you are trying to teach your puppy. Expect that your puppy will have accidents and refuse to let it ruin your day.

Return from Paper Train a Puppy to the Homepage